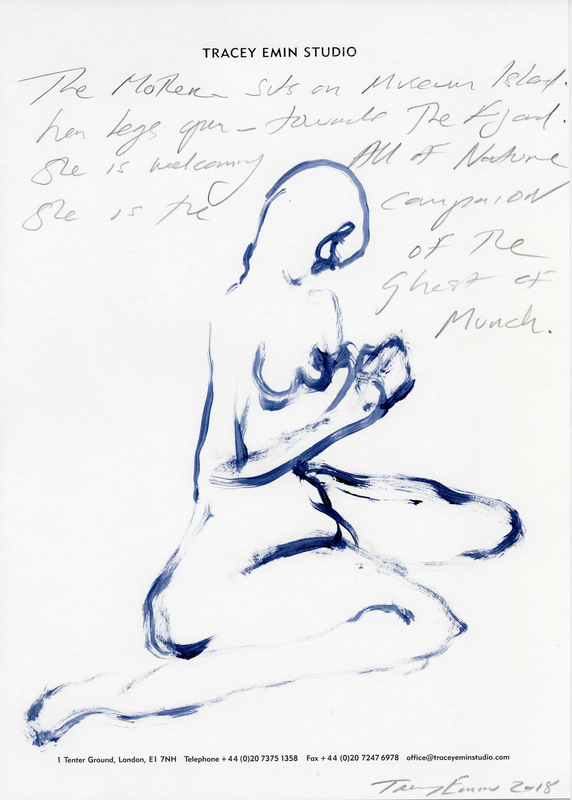 The 7 metre bronze sculpture The Mother will sit kneeling at the end of the Museum Island, her legs open and her hands cradling an unseen object. Her back is turned towards the museum which rises towards the sky behind her. The Mother faces the Oslo fjord, perhaps also inspiring visitors to gaze towards the horizon.

The City of Oslo is home to many bronze sculptures, and most of them portray men on plinths. Emin utilizes this age-old material and technique, while she radically shifts the focus of the genre by depicting a large nude, vulnerable and anonymous woman. This is not a sculpture about individual male heroism, instead the whole island will be transformed into a site for the contemplation and celebration of eternal feminine and matriarchal sensibilities.

The Mother sits like a sphinx, awaiting the tide. According to the artist, she is the companion of the ghost of Munch. She symbolically protects the home of his oeuvre, the new Munch Museum behind her, and becomes a welcoming sculpture for all visitors approaching from the fjord.

Tracey Emin (1963) lives and works in London, England and France. Her art is one of disclosure, using her life events as inspiration for works ranging from painting, drawing, video and installation, to photography, needlework and sculpture. Emin reveals her hopes, humiliations, failures and successes in candid and, at times, excoriating work that is frequently both tragic and humorous. Emin holds an acclaimed position on the international art scene and has an extensive international exhibition history.

The Jurys´ assessment:
Emin’s proposal of a large seated female figure facing the fjord promises to be a striking presence at the edge of the Museum Island and against the backdrop of the cityscape/architecture of Bjørvika. With its immediate and visceral artistic approach it appears both intimate and majestic, vulnerable and grandiose. The title The Mother refers to a mature protector and the sculpture brings to mind the ubiquitous motifs of women and the nude in Munch’s work. As a non-idealised depiction of a woman made by a woman it can also be seen as a feminist statement.

The jury believes that this proposal will appeal to a wide range of visitors and that The Mother has the potential to become a landmark and a symbol not only for the Munch Museum but also for Oslo harbour. Tracey Emin is a life-long admirer of Munch, and his art has been a vital inspiration for her for many years, making The Mother both apt and site relevant.

The Jury therefore unanimously decided to choose The Mother as winning proposal to be executed for the Museum Island.

The artwork is a sculpture in Liver Patinated Silicone Bronze. Its dimensions are 7 x 4.5 x 4.5 metres. The sculpture will be placed at the southern end of the Museum Island.