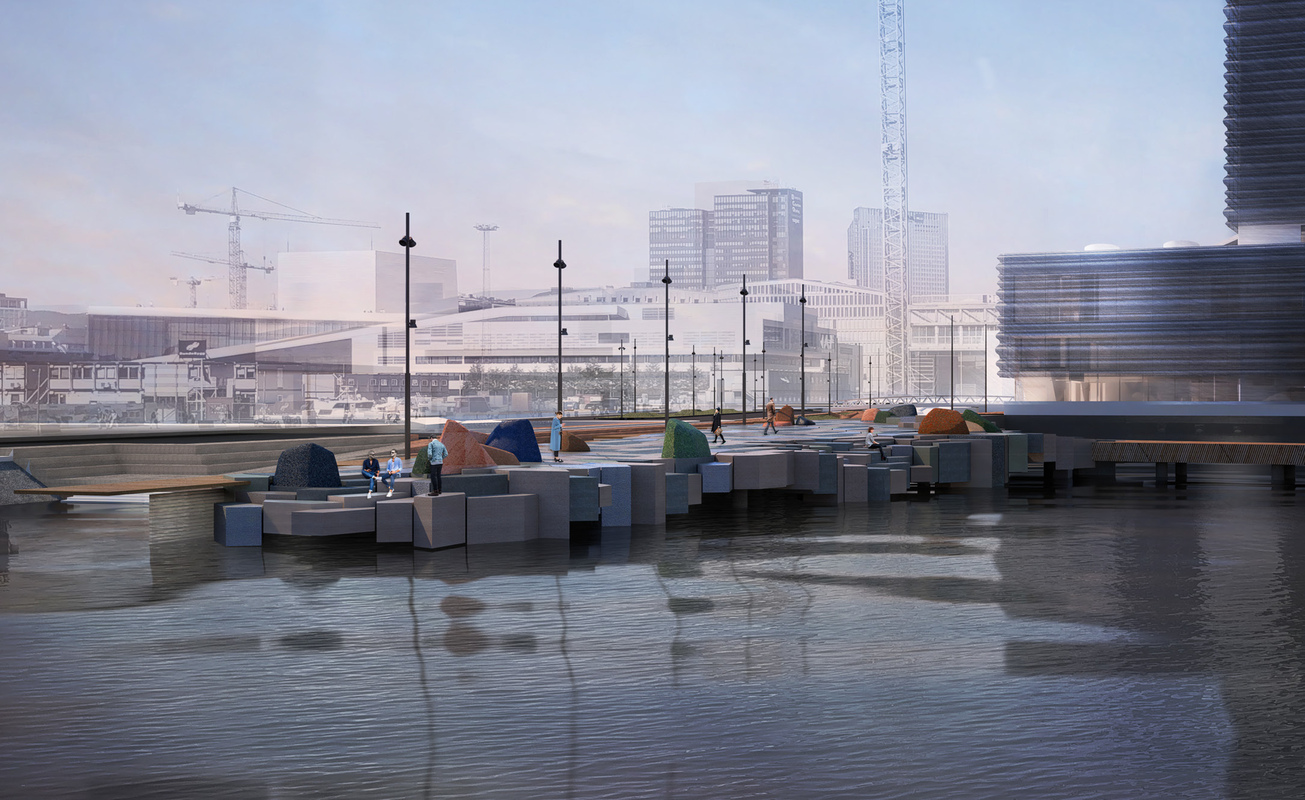 By juxtaposing organic curves with rigid forms, Edvard Munch captured the spatial dissonance between nature and the urban culture emerging across Europe in the early twentieth century. This is the point of departure in Olafur Eliasson’s proposal for the Museum Island, a landscape and a transitional zone between Oslo’s harbour and its city centre.

The large-scale tiles, based on a complex pentagonal tiling pattern, serves as the formal units that, through their repetition, constitute this built landscape. As a continuous surface, the thick tiles rise from the ocean to form a walkable topographic landscape. Six varieties of tiles, made out of concrete coloured with different types of Norwegian granite, are placed at variable heights to establish positions for visitors to sit on and contemplate the city and the sea. Eighteen of the tiles take the form of three-dimensional boulders cut from solid granite, establishing further spaces for stillness and intimacy. Some provide seats and spaces for socialising, while others mirror visitors in their human scale.

Munch’s shoreline paintings Inger on the Beach and Shore with Red House inspired this project with their liminal atmospheres and sense of intimacy in open space. The colours of the tiles reflect both the variety in native Norwegian granite and the palette used in these paintings. The repeated colour system intentionally destabilises the order of the tiles themselves; as the colours perceptually undermine the logic of the system, further bringing together order and chaos. As Eliasson observes, «Munch’s shores are a meeting place of great beauty and the deepest subconscious turmoil».

Olafur Eliasson (1967) lives and works in Copenhagen and Berlin. His art is driven by his interests in perception, movement, embodied experience, and feelings of self. Not limited to the confines of the museum and gallery, his practice engages the broader public sphere through architectural projects, interventions in civic space, arts education, policy-making, and issues of sustainability and climate change. Since the mid-1990s, Eliasson has realised numerous major exhibitions and projects around the world.

By the shore is a site-specific artwork that creates a landscape for the new pier.
The constructed landscape is made from prefabricated concrete pavers with granite aggregates, granite boulders (Norwegian Labrador MC marina pearl, Norwegian Labrador emerald pearl and Norwegian Labrador antique) and a wooden deck. The planned landscape will be 24 x 67 metres, with a slope descending towards the bay from the north to the south.